John T. Elson, whose 1966 cover story for Time magazine — provocatively titled “Is God Dead?” — produced record-breaking newsstand sales with its perceptive analysis of a debate that animated Sunday churchgoers as well as theologians, died Sept. 7 at his home in New York City. He was 78.

The April 8, 1966, issue was the first in Time’s history to feature only words on the cover: “Is God Dead?” in large, red letters on a black background. The story elicited more than 3,500 letters, an unprecedented response. It also broke a 20-year record for newsstand copies sold. 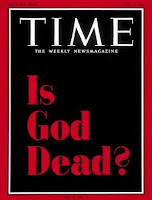 “The story brought a brimstone of controversy, but given the depth of the reporting, few could argue that the writer had not done his homework,” former Time managing editor Jim Kelly wrote in an appreciation of Elson published on the magazine’s website. The story, which had been under consideration by Time editors for nearly a year, was driven by a growing awareness that the secularized world of the 1960s was causing theologians to rethink traditional concepts of God.

His widow recommends we read the last paragraph of Elson’s cover story:

Gabriel Vahanian suggests that there may well be no true faith without a measure of doubt, and thus contemporary Christian worry about God could be a necessary and healthy antidote to centuries in which faith was too confident and sure. Perhaps today, the Christian can do no better than echo the prayer of the worried father who pleaded with Christ to heal his spirit-possessed son: “I believe; help my unbelief.”